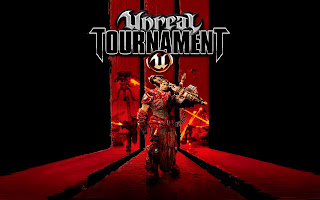 Mount UT3 DISC3 and change to that directory and 'sudo su' to root. Then enter:
# export SETUP_LIBC=glibc-2.1
# linux32 ./setup.sh

Scroll through the license agreement and agree to it. Since you are running as root, you can install the game in /usr/local. If you want it installed only for your use, change the paths presented to you, like ~/games and ~/bin. Choose the base install and pass on the server install (unless you really want to install the server rather than the client ... but that's another post). Don't go wild and install all the optional drivers (maybe you have a Voodoo video card handy that you want to use, more old-school power to you). Just answer no to that stuff. Why? Why, indeed.

Now you get to read the README. If you have lynx installed, you get to see this. Press q to quit. 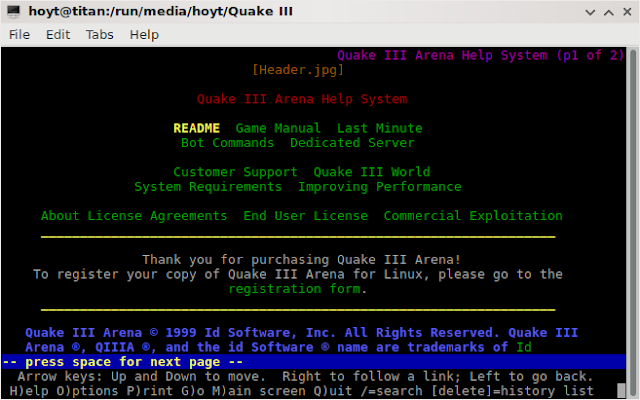 Otherwise, you get to read it some other way. Please read it. When you are done, you can launch the game as a regular user via the Desktop icon you just installed, or from a command line by simply typing quake3 in a terminal.

In Conclusion ...
You can overcome the problems with the obsolete installer, but running the game will not work well due to a rendering issue, and even if it did, the sound won't work.  Please contact me if you have found solutions to these issues. The Linux binaries are just old and crusty. So just use . . .

WINE
The game runs quite well in WINE, PlayOnLinux and Crossover. Use them. You will need some files to run the retail version using WINE.

Titan Expansion Pack
Unreal-Tournament-3-Titan-Pack-Expansion is a massive overhaul of UT3.

GameSpy Patch
Since GameSpy dropped server support for UT3, you will need to get UT3-PatchGS_21.

Community Bonus Pack Volume 5
CPB3-#5 is full of levels and content from the best in the community.

UT3 Bonus Pack
This is the official downloadable content.

Errata
Just as a curiosity, there are two legendary fan-made files that can no longer be found: FanPack_UT3v1.0 which contains a huge amount of maps, mods and skins (description -- but no file -- here), and Vika_ut3.zip, a very nude female skin (link supplied by JEVH -- THANKS!). If you have these files, I'd be glad to host them.