The Sims Complete Collection on WinXP 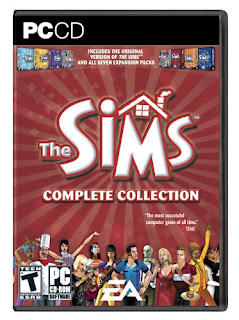 The motherboard used is a Microstar MS-7061 with an AMD Sempron 3000+ and 2GB of RAM. There were no IDE hard drives or CDROM drives available, so IDE to SATA adapters were used on SATA drives. The video card is an nVidia GeForce 6200 compliant with Microsoft DirectX 9.0c specification and OpenGL 2.0. This is adequate to run The Sims satisfactorily.

Installation began with an on-hand copy of Windows XP SP2, but it turned out that the game would install but not run on that, so an update to SP3 was needed. I did find an unofficial "SP4" and installed that without issue.

Security on this system is not much of a concern since there is no personal information on it and it is not connected to the Internet, only the LAN and there are only Linux and Mac devices on the LAN. There's no satisfactory way to remove or disable Internet Explorer on a Windows XP machine, so the machine is just isolated and IE (or any web browser for that matter) is not used at all.

The 4-CD installation went without issue. The largest resolution the game runs at, by default, 1024x768 in 16-bit mode. There is a Wide Screen Patcher that modifies the Sims.exe file. If you can navigate a hex editor, here is how to do it. There is a widescreen fix available, but it requires a specific version of the No-CD Sims.exe. My display is 1920x1080.
One of the biggest annoyances is the requirement that the original game CD be physically in the drive in order to play the game. A NO-CD "patch" can be obtained from GamecopyWorld.com or other sources. I'll post a link to the correct one below, or tell me about your success in the comments below. You can get the NOCD version for the standard 1024x768 resolution here, the NOCD version for a 1920x1080 resolution here and instructions on how to modify the .exe file for any resolution here.
When it was new, there were many fan-made additions and modification made for the game. These can be somewhat difficult to find, but some may be had at The Sims Zone. The legendary "nude patches" and skins are found here and here and here. All these come with installation instructions.

Are there cheats codes? Sure are! Press CTRL+SHIFT+C during game to display the command prompt. After successfully entering and activating one of the codes you can also do the following: Enter an exclamation point at the prompt to repeat the last cheat entered. Enter a semi-colon between codes to enter several codes at the same time. A list of the codes can be found here.  The cheat rosebud gets you 1000 Simoleons!

Could I have used a more modern version of Windows? Sure, if my hardware would have supported it! Here's a link to getting it to run using Windows10 with a widescreen fix. I've read that Windows Vista does not run The Sims very well, but Windows 7 and 8 do just fine.

My recycled hardware for Windows 7 failed and would cause random crashes. I had a spare i7 /16GB motherboard handy, so I went with Windows10. The Sims with the above referenced No-CD executable works just fine on Windows10. However, I chose to use Windows10Debloater to remover all the useless crap that is not needed for a game machine including the data spyware that Microsoft installs. I used the "Second Method" as it was easier.
RESOURCES

January 28, 2018
Released on November 16, 1999, Unreal Tournament (also known as UT99) is an arena first-person shooter for Multiplayer on-line competition or you can play against bots off-line. It features several game types, with more details provided at Wikipedia . The game was re-released on February 25, 2000 as Unreal Tournament Game of the Year Edition (GOTY) which included the three bonus packs released previously and additional mods, or game modifiers that had become popular. It is the GOTY version that is available from STEAM or  GOG.com . The GOG version for Windows installs in Linux and plays well using WINE , PlayOnLinux or Codeweaver's Crossover . There is a Linux binary available in two versions, one for the original game and one for the GOTY edition . Also provided at that site is the Official Bonus Pack with a Linux installer. All these Linux installers are created with makeself . There are some issues using such a crusty old Linux binary. Let's see why getting a Lin
2 comments
Read more

August 07, 2017
The popular GUI DVD-authoring apps like K3B and Brasero, do not support burning ISO images in sizes greater than 4GB, which is odd, since they can detect the discs and can create an ISO image greater than 4GB. Please recognize that "4.7GB" is sleazy marketing misrepresenting GigaBytes, i.e. 1000  and not 1024. If translated to actual capacities, single layer DVD±R[W] capacity is only 4.4GB, and 26GB BluRay Disc is actually 23.3GB. Keep this in mind when creating your ISO images to burn manually. I purchased a Blue-Ray writer (an LG-brand Hitachi Model WP40NB30 )  hoping to use the 25GB M-Discs to archive some of the files I have accumulated spread out over several computers. Fortunately, the growisofs tool comes to the rescue, so from the command line, I just execute as a regular user: $ growisofs -speed=1 -Z /dev/sr1=big-image.iso I need the lower speed to keep from prematurely emptying the buffer which borks the disc. Although older, this page provides plenty
1 comment
Read more